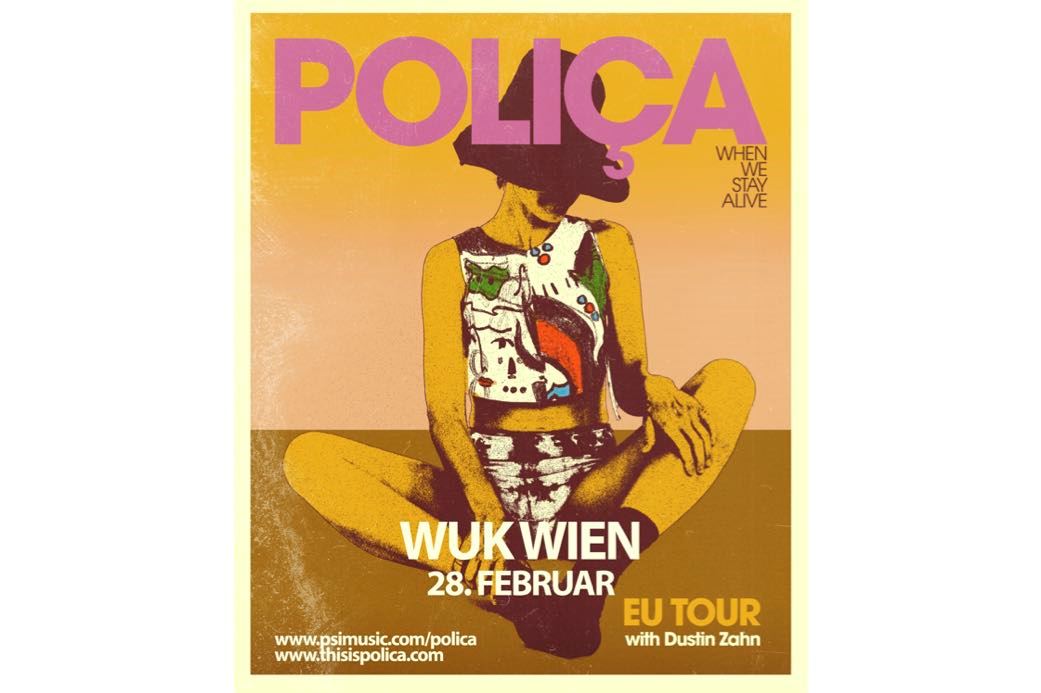 WHY BUY TICKETS AT PSI2? Print@home gives you the ability to print tickets online, with low price and fast from your home and then be shown at the entrance. You can pay with credit card, bank transfer, payment in advance and PayPal. Click on a show to buy you're tickets.

Tickets at the doors available.

Poliça today shared “Steady,” the third new track from the band’s forthcoming album When We Stay Alive, due out January 31st via Memphis Industries. An acoustic ballad with electronic arrangements, “Steady” finds Channy Leaneagh reflecting on motherhood. “It’s about looking around and realizing you and your kiddos are all alone and feeling terrified about taking care of it all and raising good humans to boot,” she explains. “I see my own weaknesses looking back at me everyday as a parent and I've also found my strengths. Building our own family and foundation.” Listen via YouTube HERE and at all DSPs HERE.

“Steady” follows additional early singles “Forget Me Now” and “Driving,” which collectively earned acclaim from outlets including Rolling Stone, Pitchfork, Vulture, Refinery29, Stereogum, The FADER, and Brooklyn Vegan, among others. Produced by Poliça co-founder and producer Ryan Olson and mixed by Jim Eno (Spoon), When We Stay Alive is available for pre-order here.

Poliça will head out an extensive tour throughout North America, the UK, and Europe beginning early next month. A current itinerary is below and tickets are on sale now.

When Leaneagh fell off her roof while clearing ice in early 2018, she smashed her L1 vertebrae and battered her spine, leaving her in a brace with limited mobility for months. Yet When We Stay Alive, is not about one debilitating accident. It’s about the redemptive power of rewriting your story in order to heal, and reclaiming your identity as a result. In the still silence of healing, she found that a multitude of feelings were becoming very loud. Leaneagh realized her self-identity had become attached to her experiences of physical and mental trauma, and she began to consider what it would be like to live without the past as a burden. “I felt there were many things I could look at and say, ‘This happened to me but I’m okay now. It’s not happening anymore and I got the care I needed for it. Now it’s time to rewrite the story I tell about myself and to myself,’" she explains.

When We Stay Alive possesses a new confidence in its sound, reflected in its fierce, determined songs and anchored by the heavy synths and punctuating beats of Olson. Over the last several years Olson and Leaneagh have widely collaborated with musicians from all over the world: both with Bon Iver, and Leaneagh individually with Boys Noize, Lane 8, Sasha, Leftfield, and Daniel Wohl; Olson with Swamp Dogg in addition to countless musicians from the 37d03d collective. As a result, When We Stay Alive features one of the largest musical casts of any Poliça record to date.

On Poliça’s first three albums, Leaneagh focused on restructuring the world and her relationships within it. On When We Stay Alive, she realizes the power in restructuring her inner self. The album’s title references the idea of moving forward through life—our experiences, both good and bad—and what happens next with the strength we find.LINKS: